It's a beautiful day today, November 3, and our walk is going to be a bit longer. I did better on my steps so we're going to walk about 1.7 miles (or so). I thought we'd head over to Little Stukeley. It's a little village close to RAF Alconbury.
Here's Cherlyn and Rob's house, down at the end on the left, where the little silver car sits. That's their old car. They sold it just a couple of months ago. See the little grassy area on the right? That's a small field right across from them where they go out to play. Bobby, Michael and Grandpa played ball out there when we were there. There's a fence and gate at one end of it and it leads out to the fields, which are much further out to the right. 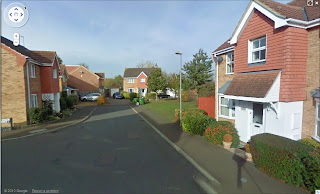 Here's the little field. Looking straight at it, next to the big tree in the back, is where that gate is. I believe, if I'm seeing properly, that it's rapeseed season. They grow it there in the spring and the fields are absolutely gorgeous. It's a member of the mustard flower so it should be easy for you to imagine fields and fields just covered in mustard flowers. Like I said, gorgeous. 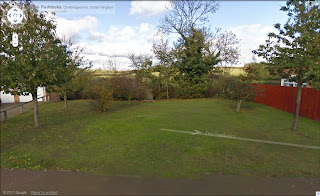 I'm standing in their driveway, next to their car. The field is on my left and I'm ready to head down the street now. This is the way we went when we walked Bobby to school when we were there this past Spring. He'd ride his scooter and we'd walk with him. I'm so glad they asked us to watch the boys for them. What a great time. 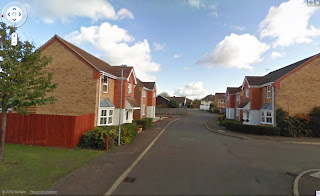 We're at the end of their street now and this is School Way. Bobby's school is just to the right and across the street. You can just see the edges of some of the cars in the parking lot. We're going to turn left here. 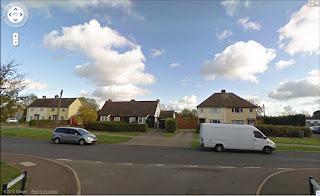 Ah. School Way. Cherlyn told me yesterday that she just discovered a very popular walking area. If you go all the way down School Way, to where it ends, there's a field and a fence. You cross the fence and there's a trail that takes you up the hill (to the left) where you can then turn around and see the entire village. She sent photos and it was beautiful. There were leaves and Fall colors everywhere. We're not walking all the way down School, though. 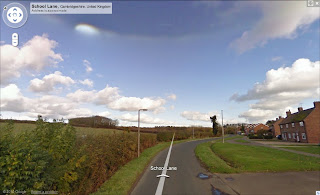 We're turning right on Manor Lane. I think of this street as the big British knickers street. When we were here, there was a woman hanging out her wash most days. There were lots of British knickers. :o() 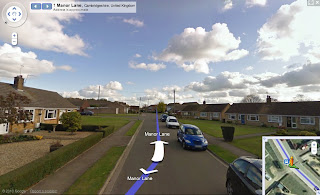 We went all the way down Manor, which has some beautiful flowers in some of the homes' gardens, by the way. Springtime is so pretty here. We're coming up to Rust Lane and we're going to turn left. 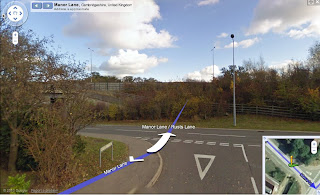 Left on Rust and it's going to take us to the Motorway. I believe we're going to be following some of the Great North Road, but it doesn't bear that name right here. 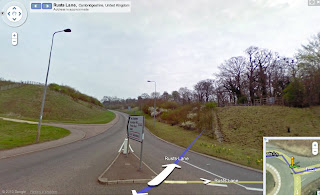 Off we go on Rust Lane. Doesn't everything look so pretty? I love that they're right in the middle of the country, even though they're pretty close to some large cities and towns. It doesn't look like things are as spread out as they are in the states. 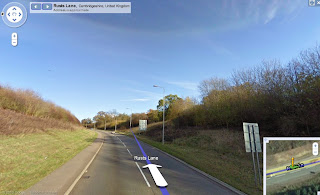 We're coming up to a roundabout that will turn us in the direction we want to go . . . if we do it right. See the sign that says "The North?" That's what they've always called the northern part of England. Mike said that they referred to it that way in the Robin Hood movie he watched recently. 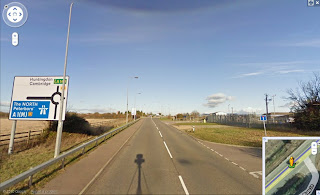 Roundabout! Watch the signs. Watch the traffic. Look out for other cars. Don't miss your exit. 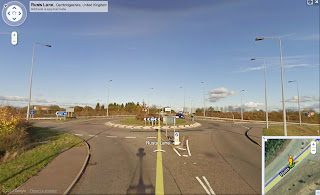 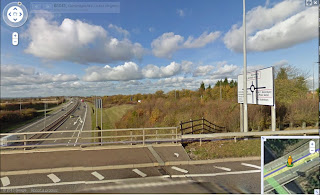 Another roundabout! Agh! Cars are coming at me!! 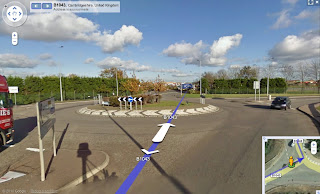 Made it through the roundabout and now I'm on the road into Little Stukeley. At least I think I am. 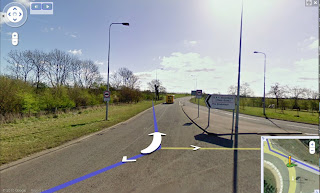 Straight and narrow, with lots of pretty fields, pretty skies, pretty clouds. Like I said. It's a glorious day. 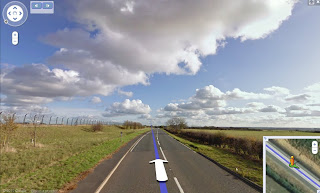 I believe we're getting close to the village. 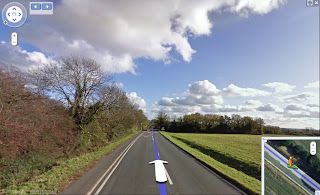 Yes, here we are. This is a traffic calming measure. We're driving on the left side of the road and you'll see that it's blocked. If there's no one calming at us in the other direction, then we can move into the other lane and go. If there's someone coming towards us, then we have to yield to them. Cherlyn said that she thought it was because people were driving into the village too fast so this slows them down. 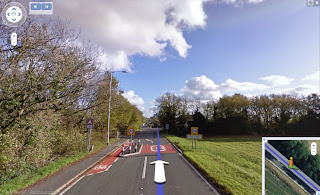 Here's Little Stukeley. If you blink, you'll miss it. 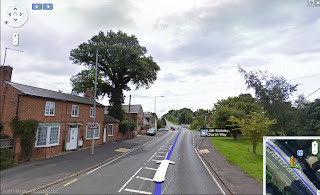 This is our stopping point. Look at the beautiful house with the thatched roof. Pretty, huh? 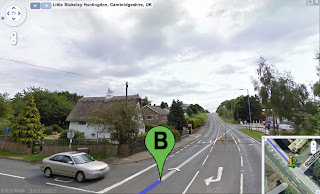 On the other corner (on the right) is this other very pretty house. My guess is these houses are very old. Like probably a couple of hundred years old. 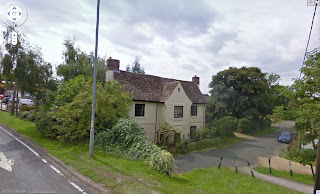 And this one was on another corner. Another very old house in a very old country that, for some reason, seems to have a real hold on my heart. I hope you enjoyed the walk today. I did. See you tomorrow! 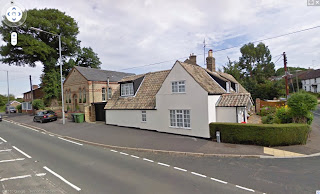